What an incredibly tumultuous weekend. I feel that the weekend just passed had such highs and lows that I simply have to share it.

I woke on Saturday morning with the intention of heading to Surfside Motorcycle Garage at 10:30am for a morning coffee and breakfast with a close friend. I geared up and hopped on my trusty 2009 Yamaha R1. I popped her in neutral and kicked the side-stand up before hitting the starter. She cranked as expected, but something didn’t feel right… She cranked again… And again… And again, but didn’t fire. I sensed an absence of her normal “cranking force” that she’d normally start with. I gave her another go, but this time the cranking grew tired and I knew the battery was running below the necessary level. Without running the battery entirely flat, I moved to bump start her. I threw her into second gear pulled in the clutch and waddled her down the driveway until I hit around 15km/h. I popped the clutch and hit the starter… She cranked, and cranked again… The rear wheel slid (it was wet), but she refused to fire up! I repeated the process. Still no luck.

The battery was not giving me enough to work with.

I decided to trek it to Brian Connor Motorcycles to grab a replacement battery. Mine hadn’t been replaced in a few years so it was not entirely unexpected that I needed a new one. I got to Brian Connor’s and bought a suitable replacement battery for around $125ish and returned to my bike to replace the flat battery. Cutting a long story short, I made an incredibly novice mistake and bridged the positive terminal which fried the 50A main fuse as well as a 7.5A backup fuse. Fuck.

My Saturday consisted of wasted time, wasted money and a bunch of turfed plans. To make matters worse, I pissed off the Miss who tried her best to encourage my mood back to positivity. Worst day ever.

I awoke on Sunday bright and early with a focused demeanour. I was adamant that I would source the replacement main fuse and backup fuse. While I waited for the few shops that open on Sundays to open, I settled in to watch my team (Italy) win against England in their first match of the 2014 Fifa World Cup. Little did I know, the sweet victory of my team would set the tone for the rest of the day. I began calling shops to source the toasted fuses.

All to no avail, when finally I called Auto One in Chatswood. They had one….. One….

I hurriedly got over there and picked up the replacement main fuse and backup fuse. 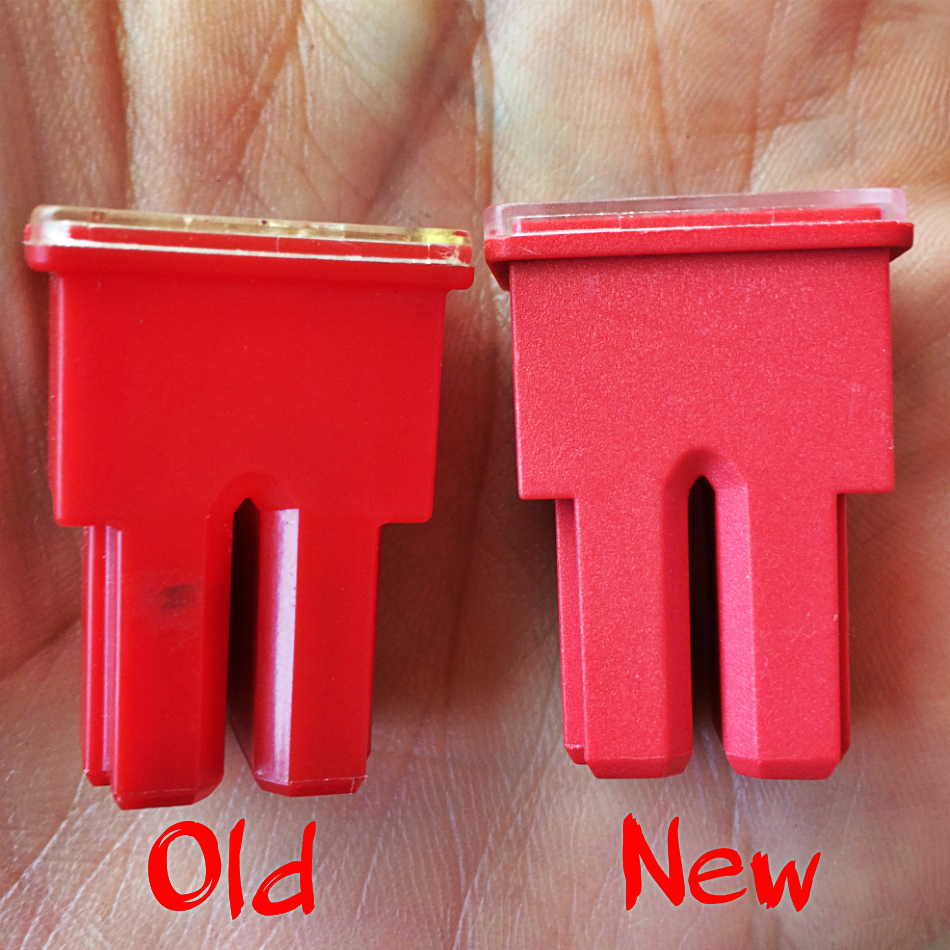 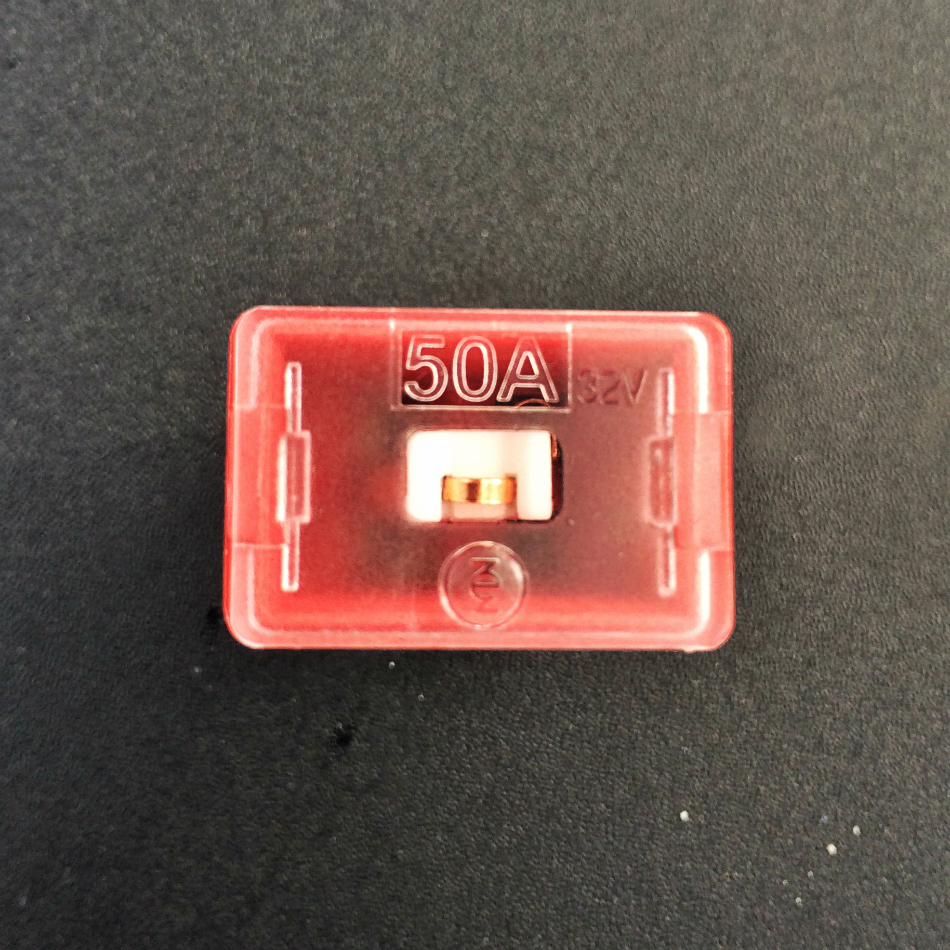 I got back to the motorcycle and replaced the fuses as necessary. 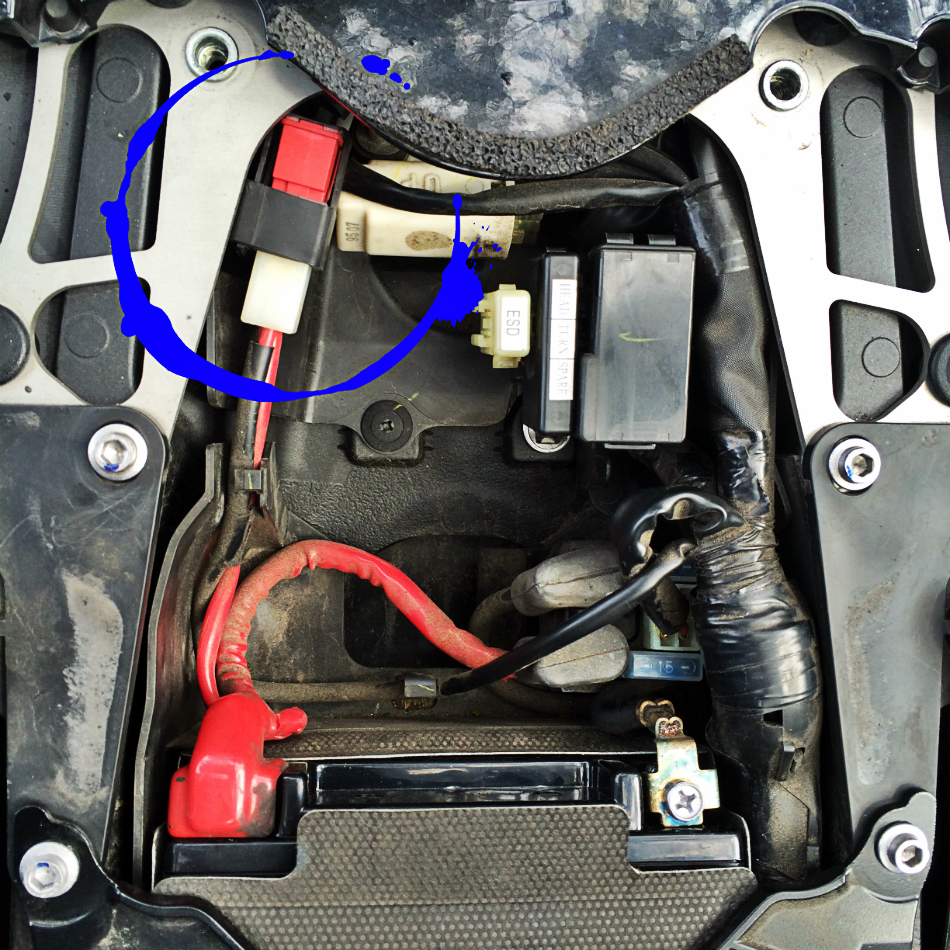 I refitted the seat and gave starting her a go… She started with such willingness, it brought the biggest grin to my face. I hopped on and took her for a (rather spirited) victory ride. I ended up at the workshop, where I moved on to trying to get the 1986 BMW R80 started… But before I proceeded with that, I gave the R1 one last rev of satisfaction:

With the R1 back to normal, I moved my focus onto the R80 build like I’d intended to on Saturday. I spent time preparing all necessary systems for the test run. I reinstalled a battery temporarily and filled the motor, gearbox, drive-shaft and bevel-drive with oil (two different types appropriate to each application). 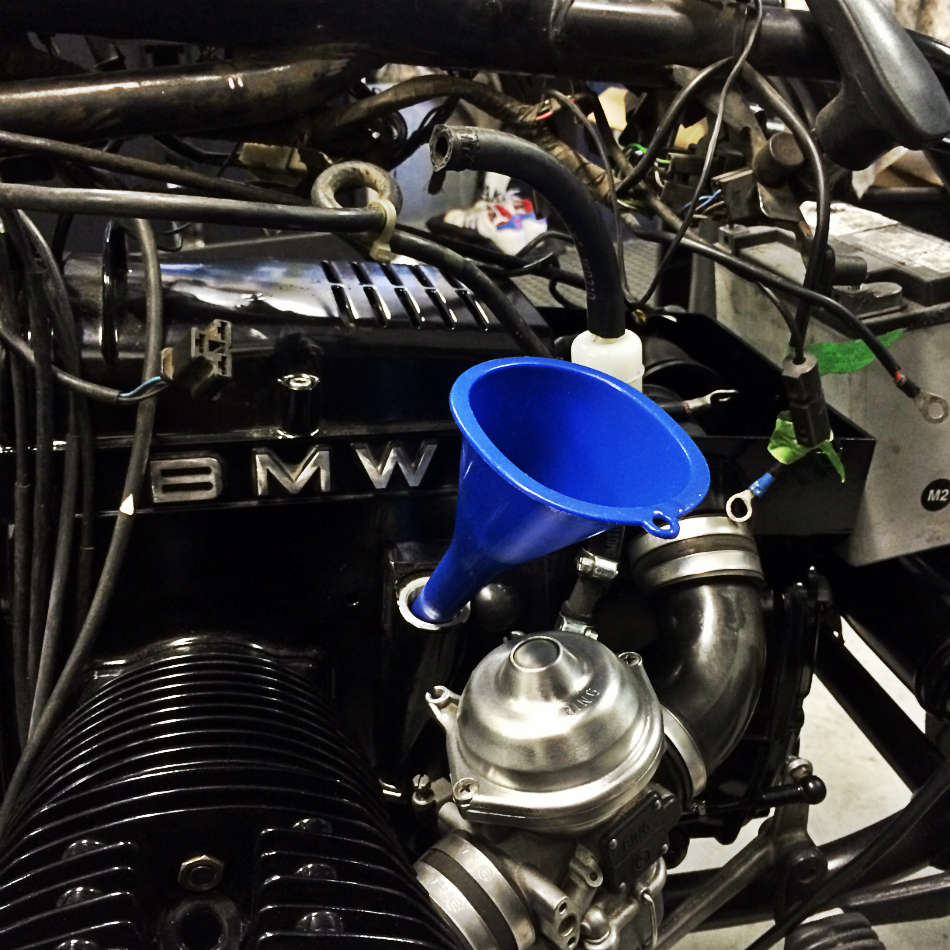 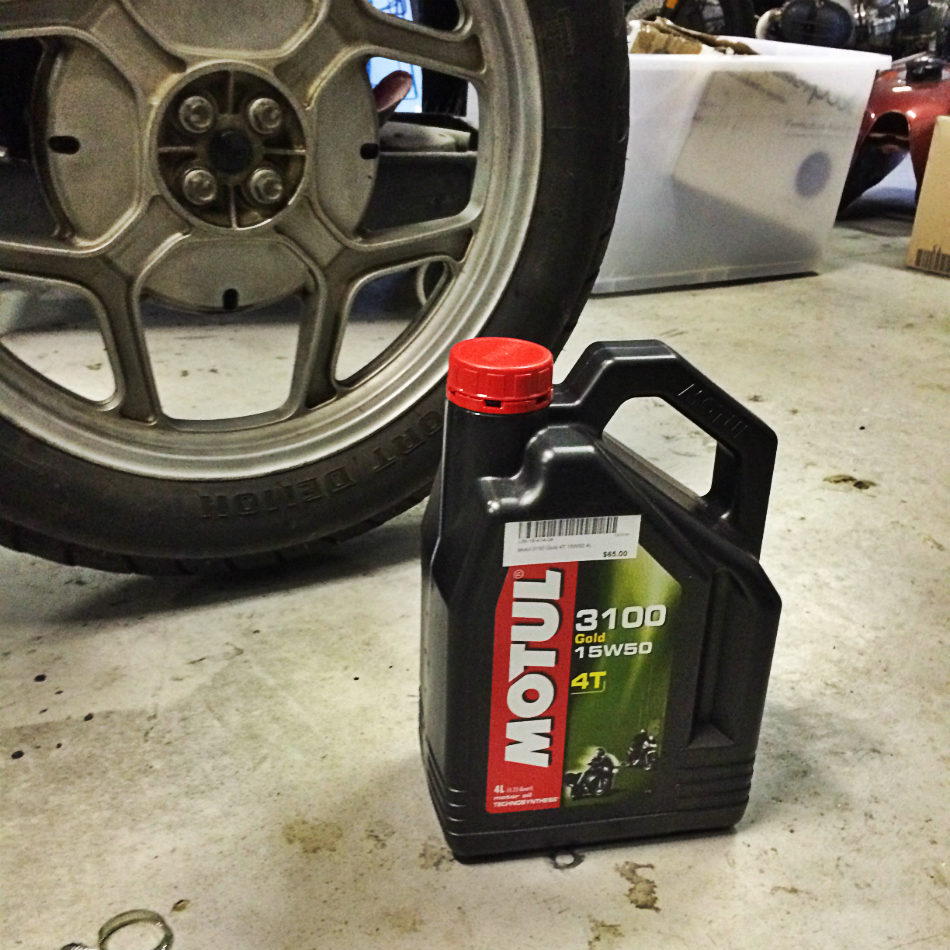 I then installed some new spark plugs and connected the high tension leads. 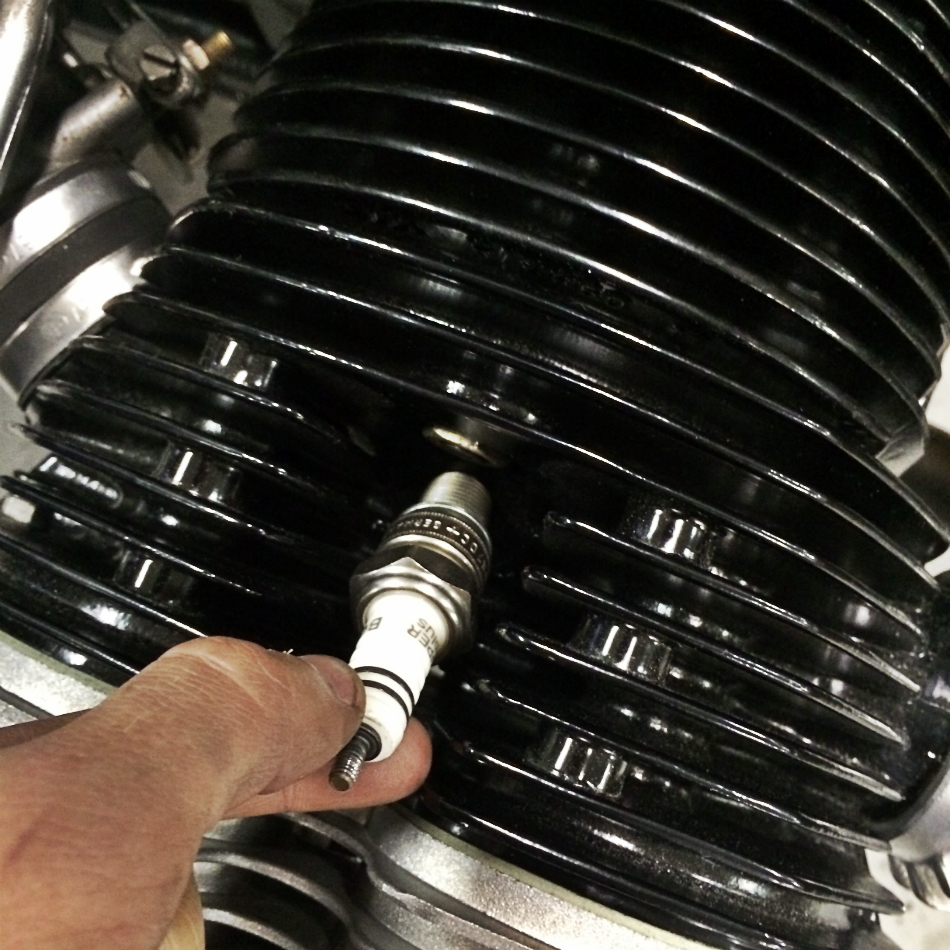 I put the BMW R80 tank back on (it still contained some 98 octane petrol), and opened the petcocks on each side. The petrol flowed into the fuel lines and into the petrol filters. When the petrol reached the fuel balance tube however, it started to drip out of the lines – this was due to the age of the fuel lines I was using temporarily for this test run. I closed both petcocks and mopped up any petrol that had leaked out. I then removed the tank again as I now had enough fuel in the lower fuel lines to test starting the motorcycle. I rotated the rear wheel several times to lubricate the internals as much as possible and after a little bit of fiddling with electrics that needed to be plugged in, I was ready.

I put her in neutral, crossed my fingers and pressed the starter.

I’m incredibly amazed that the motor ran so willingly with no encouragement. The intakes weren’t choked and there was no added throttle… She just started and idled without hesitation.

I went from having neither the R1 or the R80 running on Saturday, to having both running on Sunday!

To further improve my Sunday, I returned home to find my favourite food in the world (Canederli) was there waiting for me, the Catalunya MotoGP was on and things were on the mend with my lady.

What an insane weekend.

Thanks for reading (despite all the personal turmoil!)