We’ve had a look at the engine on the CT this afternoon.  From far away it looks pretty decent. A few scratches here, a bit of dirt there.  Considering it’s spent much of it’s life on a farm it didn’t look so bad and we were hopeful.  Move in a little closer, however, and the issues start to appear.  The pool of oil under wherever the frame has been sitting for more than one night, the misaligned gaskets, the mismatched bolts on the top…  It’s clear that someone’s had a crack at the engine once before.

With the help of Jordan, Findyourexit and I disconnected the electrics, removed the supporting bolts and took the single cylinder 125cc engine out of the frame and got to work. 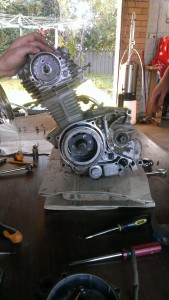 Side cover plates coming off

It became clear very quickly that while the engine has had work done to it in the past, it certainly wasn’t recent.  The bolts decided they wanted to put up a fight, and a number of the phillips heads just warped and stripped to any pressure being applied. 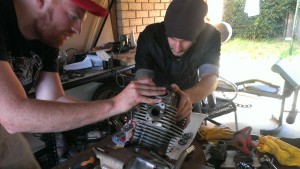 After some swearing, hammering, and general aggression, the top end was off and the gearbox has been opened up. It looks like some extra effort will be required to get some of the stubborn bolts out now. 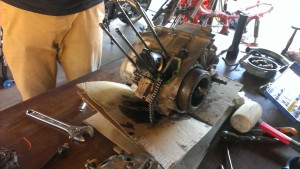 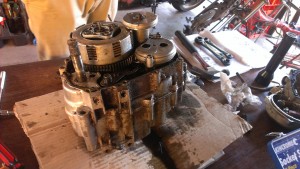 Findyourexit and I will keep you posted on the engine rebuild as we wait for an allen key bolt kit to arrive to make sure that all the bolts are from the same set and we replace all the torn apart bolts with something a bit more user friendly.